skip to main | skip to sidebar

Boris Rybakov. Paganism of the Ancient Slavs (in Russian), 1988. 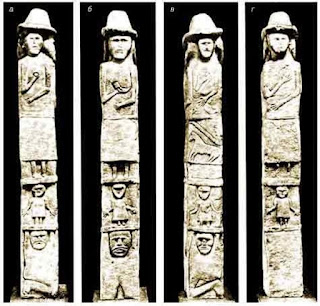 Boris Rybakov's research suffered an unfair fate. As a true son of the Party he participated in all its campaigns, including Anti-Semitic cleansing of academia in the early 50s. His contemporary papers lavishly cited Marx, Engels, Lenin and Stalin and he tried to prop nationalist agenda of late Stalin's and late Brezhnev's regime. Because of that, his scientific work--similarly to another Party toady--physicist Blokhinstev, acquired, in some circles, a reputation similar to Lysenko's. I cannot vouch for Rybakov's veracity of archeology of the ancient Slavs, but Blokhinstev certainly was a world-class physicist and a brilliant teacher of physics.

Posthumously, the fate of his research was even worse. Some of the Russian Aryan Brotherhood-modeled cults used his reconstructions of the Old Slavic pantheon to bolster their heinous ideology. Without attribution, this rot propagated to Scandinavia where Norse mythology currently feeds nationalist movements.

After the fall of the Communism, he was accused of peddling so-called "autochthonous" theory of Slavic origins, by which his detractors tried to blacken his reputation even further. Indeed, he avoided a slippery question of Norman (i.e. Germanic) origins of the recorded Russian statehood for most of his career. However, now the existence of Slavic quasi-states before the Norman conquests on the island of Rugen and on the Danube is not much in dispute.

Yet, in 1988, during wild Perestroika times, he published his Magnum Opus, Paganism of the Ancient Slavs remarkably free of ideological garbage he tried to uphold over the years.  This is not surprising that, given his limitations (he never fully absorbed structuralism, and its stepmother, comparative linguistics) that some of the "Paganism..." does not correspond to the modern standards of scholarship (how many English humanities' studies are?). Many of the threads were left unfinished reflecting his decline with the old age. Yet, it is absolutely amazing how many of his conclusions based on archeological studies now can be confirmed by the mytochondrial DNA analysis unavailable at the time (see Manco, 2014).

Slavic studies are currently in the deep decline. During Havel years, Czech academics were reportedly required to deny the Slavic origin of Czech and invented Mid-Western-European group of languages instead. In Poland, citing Russian sources means the end of the academic career. So we all have to wait before some Polish or Slovak (i.e. NATO-approved) researcher comes up with similar conclusions and further propels his studies.
Posted by Alex Bliokh (A. S. Bliokh) at 1:43 PM

Old Possum is a fictional character created by late T. S. Eliot (I believe in a public domain) and it is in no way associated with any of Broadway musicals.

I welcome comments on the factual errors and, given that most of the material on the blog is book reviews, copyright inquires and corrections. Whatever your opinion on what I am writing I welcome your input as long as you don't insert talking points, which replaced views and opinions in the murdochized world media. Life is too short for one's own stupidities to repeat somebody else's.

Alex Bliokh (A. S. Bliokh)
Alex Bliokh (Alexander Semionovich) is a retired engineer from USSR missile program biding his time to Alzcheimer's at one of upstate New York nursing homes near Corning. I invite you to visit my other blogs.

"Why all the civil libertarians a.k.a. social Darwinists I've met were either rich heirs or tenured professors?"


Q. Who is lonelier than a psychic winning a lottery?
A. A neocon who sacrificed his life for his country.

Modern technology gave everyone a possibility to become a writer. I am waiting for the new technology to create readers for all this crap.
Science is a branch of human experience where sensible distinction can be made between fact and opinion.

Original meaning of Second Amendment according to Judges Scalia, Alito, Thomas and Roberts:

"We consider these truths to be self-evident... that every crook, psychopath and senile moron should be able to have in his possession guns with firepower exceeding that of a current (1787) company of the US Army"

What about a "well-regulated militia?" Well, "And traffic them to Mexico."

Thought is something which occurs in your mind with immediate certainty of being real.

I do not want to convert anybody to my religion. I want somebody to convert me to their atheism.
The shortest summary of the world politics for the last two centuries: two periods of Western colonial expansion--one with a Gatling gun--and the other with a Predator drone, punctuated by the half-century of the "epic" struggle with Communism.

Riddle: Why so few supermodels are Jewish, while quite a few beautiful actresses are?
The key: Stupidity, for which our race is rarely known, is in their job description.

Eco-Glamour: a contradiction in terms. Glamour, by definition, is a stylish form of conspicuous consumption. Sorry, Brad Pitt, sorry Matt Damon. Sorry, Darryl Hannah, sorry Angela Lindvall. Shut up, and consume. Or shape up and pontificate. But not both.
I did not write my suicide note yet. I'm still working on it.

Electoral slogan by Ron Paul: "Give me my liberty and screw everyone else."
The Department of State made it official: every country with hydrocarbons and without American military bases violates human rights.
Envy is the most irrational of all human feelings (sins): technically, you cannot be anyone but yourself.
If you cannot defeat your enemies, try, at least, to outlive them.
Germany was born in primordial sin--from a copulation between Prussian militarism and Bavarian parochialism--and no effort of its enlightened politicians beginning with Bismarck and ending with Helmut Schmidt could erase this monstrosity.
Something is wrong with me today: even the librarians are rude.
British PMs might command the third largest Navy in the world, sixth or seventh most powerful army and one of the top ten world economies but since Tony Blair they are talking and, what is more peculiar, thinking like a third-ranking Pentagon or Department of State officials: currying favor with second-rank State Department or CIA officials etc.
Polish foreign policy for the last four centuries consisted in stirring conflict between Russia and the leading European power for the benefit of Poland, which inevitably ended suffering from both.
There was a time (XIX century) when Europe was ruled by the tiny gangs of Germanic officers called "dynasties", who spoke French, wore Florentine uniforms and whose first language was English imbibed from their Scotch or Irish wet nurses. And their rule was not all that bad.
If alien historians will ever write history of humanity, it will probably begin with: "Around year 2012, the Internet acquired sentience and reallocated human resources into senseless pursuits (Facebook, Twitter, Bitcoin, etc.) only benefiting uncontrollable growth of the World Wide Web."
(In fact, Italo Calvino already prophesied in 1960s that the computerized phone network--the predecessor of the Internet will acquire self-consciousness).
Soviet Communists, unlike their Chinese counterparts, failed not because they were good Marxists but because they were bad Marxists. Chinese leaders never followed Marxist precepts but they studied them and took them very seriously. Soviet leaders were completely cynical about Marxist-Leninist dogma, so they felt obliged to implement it to the bone.
Mark Twain once said: "Half of the members of Congress are capable of nothing. Another half is capable of anything." US were ruled O'K when these two categories were evenly split between parties. Sadly, now one party unites those capable of nothing, and another--capable of anything.
Remember that during the Kennedy era, most World War II veterans were in their late-thirties, or early forties. Kennedy was the self-image of American man of his generation: young, optimistic, handsome, smart and sexually promiscuous. Trump is also the self-image but of a current American man: old, pessimistic, senile coach potato, who still, on meth and Viagra prowls for the young women on the Internet, each to his own financial capacity. That's the source of his immense popularity.
Napoleon was a great tactician but a mean strategist. His vision was circumscribed by the battlefield. His deficiency of strategic thinking is even more remarkable given that he created Code Napoleon.
Lord Nelson was only a vice-admiral. Admirals of the age are long forgotten.
Kissinger was a titan of his age: all women wanted to be with him and all men wanted to be like him. His books were instant bestsellers, his pronouncements true and invented were immediately popularized by the media, and he became immensely rich by counseling the potentates. Only as a diplomat he was a patent failure.
It is also surprising that so many of Kissinger's pronouncements teach how to win wars given that he lost his only one.
The twentieth century could have become a German-American century, if Kaiser would do at least two of the three things: naval detente with Britain, land arms control with France or an economic union with the Russian Empire--German machines for the Russian resources. Instead German elites decided to use their temporary superiority in economic and technological power to get rid of the three rivals. After the two world wars lost it slided into geopolitical insignificance. Is it not a lesson for contemporary America?

The logic of Empire: after Alexander conquered Egypt, Greek colonists began to mummify crocs and marry sisters. After the Roman conquests, temples of Isis and Mithra appeared in Rome. And currently, we have Romanian/Pakistani elections, Polish customer service and Bulgarian/Albanian respect for the rule of law.

Russian diplomacy has a longstanding tradition to erase both war victories (Seven Year war, etc.) and defeats (Crimean war, so forth).

Q. Why all the right-wing pundettes look like they were recruited from the same escort service?
A. They, probably, were. Women who look differently (S. E. Kupp, Kristin Soltis, M. Kelly) do not hang in there for long.

According to the apocrifa, Klaus Kinkel, then Foreign Minister of Germany, said after the German unification: "And now we turn Russians to the new-age Jews". He forgot to mention whether he meant Jews vintage 1467 or 1967.


which is dedicated to (surprise, surprise) not to a consumption of Scotch by the Russians but by cultural contribution of Scots, mostly military mercenaries, but also poets, architects, etc. to the Russian society, mostly in XVIII-XIX centuries. This blog takes no position on political issues, past or present, and is intended for pure fun of history buffs.
http://mars2044.blogspot.com/ -- discussion of the future (or the lack thereof) of the manned space exploration
http://russiancentury.blogspot.com/ --the author's translations of XX Century Russian poetry.
http://oldpossumsmoviereview.blogspot.com--movies as a social, political or historic comments with intentional disregard for their artistic or cinematic value
and http://contraedison.blogspot.com
--anti-Rube Golberg contraptions. From dog cages to starships--as simple as it can be!